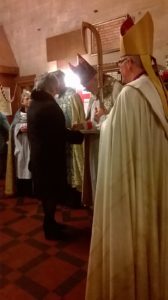 On January 12, we held a Festal Evensong to celebrate the 150th Anniversary of the Consecration of the current Church. The medieval parish church had been largely destroyed by fire on 5th January 1867. Under the architect Sir George Gilbert Scott, the n 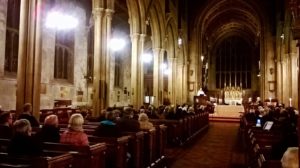 ew church, incorporating parts of the old, was built through public donations and consecrated three years to the day after the fire on 5th January 1870.  The Archbishop of Canterbury had been due to perform that service but due to illness, the Bishop of London took his place.

We were, therefore, delighted that the Rt Rev & Rt Hon Lord Chartres, who was chaplain to the Archbishop of Canterbury and latterly Bishop of London, was able to attend our service and preach the sermon. The music, sung by the Full Choral Foundation, included a specially commissioned work by Co 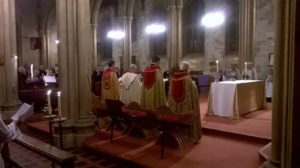 The service was also attended by the Bishop of Croydon, Jonathan Clark, the Mayor of Croydon, Humayun Kabir, and the MP for Croydon Central, Sarah Jones among many other representatives of the civic and ecclesiastical community. After the service we all enjoyed a reception in the Church Hall at which the centrepiece was a magnificent 150th Anniversary cake!

This site uses Akismet to reduce spam. Learn how your comment data is processed.